Hello again my crafty friend! It's Amanda from Pear Blossom Press, back with a fun birthday card and a cool technique for faster galaxy backgrounds.

First, let's take a look at the finished card...

Isn't it neat?! I used a combination of stamps from the I Need Some Space and Time Traveler* sets. I stamped, embossed, and Copic colored my images, then fussy cut them with my ScanNCut. I used a Mini Action Wobbler to pop up the police box on the front of the card, and texture paste to stencil on the lightning bolts behind it. An Explosion Pop-Up Die Set allowed me to create the cool effect inside.

Now let's talk about the galaxy backgrounds. On the front of my card, I used a leftover panel from my Who's Ready for Christmas cards. That was created the traditional way. For the inside of my card, I needed a whole sheet of paper, and at least half needed to be double sided. The traditional method of making a galaxy starts with white paper, you add bursts of color, then fill in most of the space with black ink. This is time consuming and uses a lot of black ink, especially when you're inking both sides of your paper. I decided to approach things from the opposite direction, and start with black construction paper. (I chose construction paper for this, because it was lightweight enough for the inside of my card, and the color is really more of a dark grey, making it easier to fade the ink out.) I used a makeup brush to lightly blend on some Picket Fence Distress Ink from the Re-Inker (not the pad). This ink is opaque, yet thin enough to easily blend on. I used light pressure and built up layers of white space randomly on the black panel. I was careful to mix up my strokes, using a combination of sweeping lines, and soft swirls. (This is a situation where less is more. You don't want blobs; you want the white strokes to fade softly into the black. You also don't need a lot of white areas. Remember, most of the sky should be black.) Once I was happy with the white areas, I added tiny amounts of Twisted Citron, Salty Ocean, and Festive Berries Distress Oxide inks with more makeup brushes. This time, I ink blended with the ink pads, not re-inkers. I only wanted a little color pop here and there, so the pads were perfect.

At this stage of the game, the panel was ugly, but just like with traditional galaxies, adding the splatters fixes everything. I added a few light spritzes of Glimmer Mist, and splattered on the same Picket Fence ink I used to blend with. (You'll want to go easy with the glimmer mist, as it is far more reflective on dark panels, than light. Also, it will cause the inks to oxidize and become whiter.) The background turned out amazing and took less than half the time of the traditional method! My fingers were also a lot less messy in the end ;) 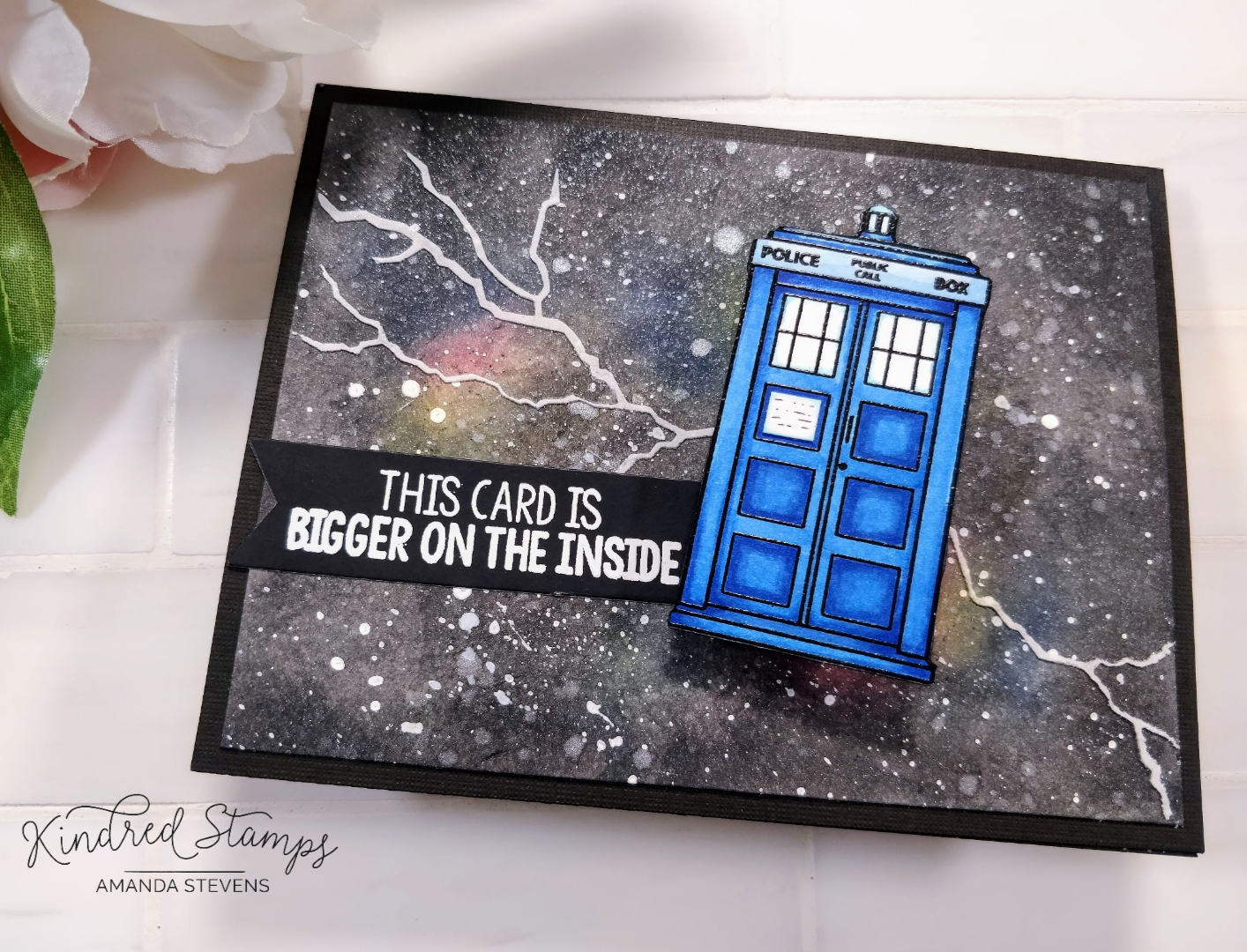 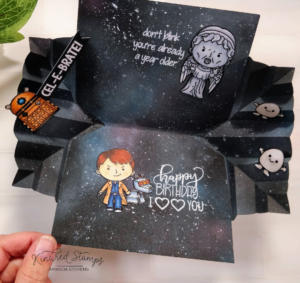 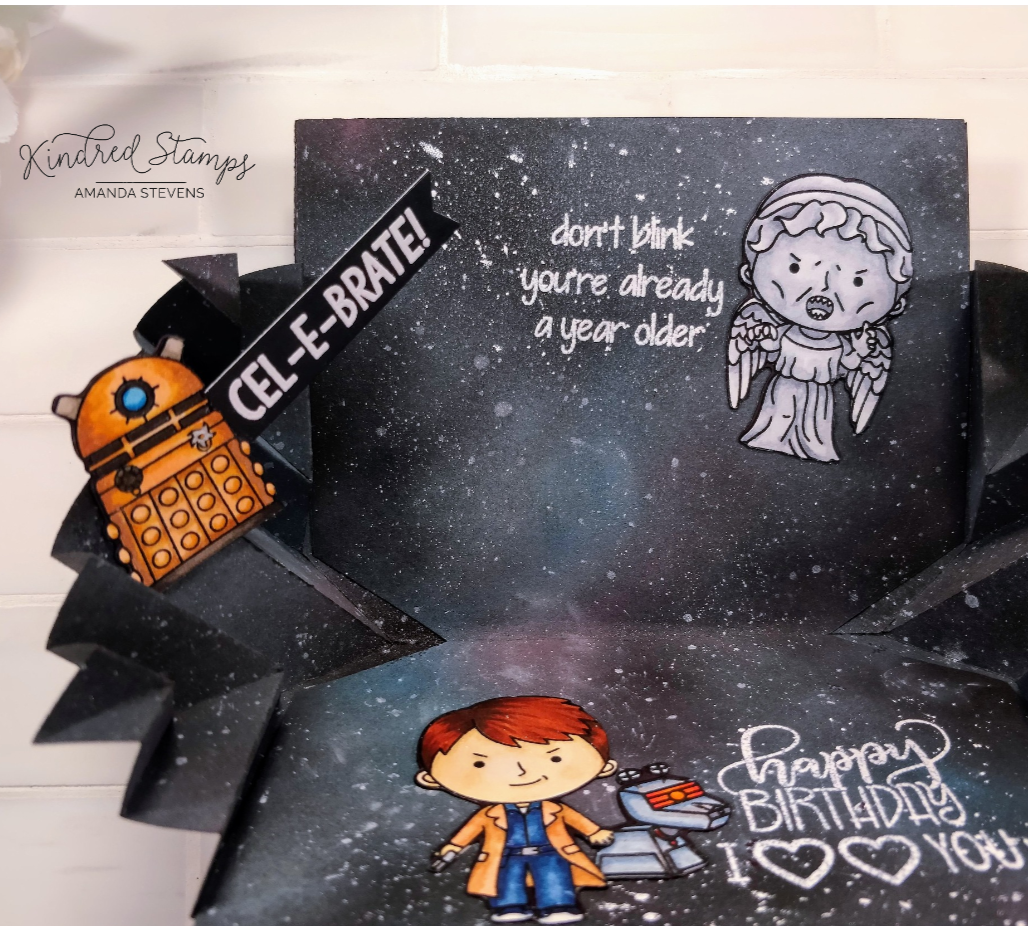 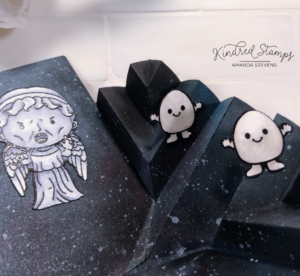 One thing I didn't account for is the lack of a fixative in my glimmer mist, so my pearly finish can smudge if I rub it too much. Next time, I'll use Perfect Pearls mixed with water (there is a fixative inside that will set with water). Other than that, it's perfect. I love it when an idea works out on paper the way I thought it would! What do you think? Do you have a favorite method for creating galaxy backgrounds? Would a process video be helpful for this technique? I filmed it, but I haven't edited it. Let me know if you'd like to see it.

Thanks for stopping by today. You can find the sister post to this article on my blog, along with links to the specific products I used. Head on over for more inspiration! I'll be back soon with another fun project! Lol, I hope that one ends up looking as good in paper as it does in my head ;)

*The Time Traveler stamp set is now retired. Occasionally, Audra will bring a retired set out of the vault if there is enough interest. You can let her know in the Facebook fan group if you'd like to see this one come out of the vault.

I agree with Sue! We need a video!

I would love to see a video on how you made this incredible background! It’s so much easier to understand than to try and figure out from reading how you did it! Thanks for sharing! January Release Kindred Stamps New Release One For Me

January Release Day 2: One For Me